Thunder Dragon is the latest version of the fish table gambling genre, each bet allows up to 8 people to participate at the same time. Thunder Dragon players may not have experienced or earned a lot of bonuses from previous online fish table versions.

In addition to receiving bonus points from the 28 creatures in the game, players also have the opportunity to enter sweepstakes. Special modes in the game offer attractive bonuses. Players can increase the odds and improve their chances of getting bonus points by participating in Thunder Dragon.

Similar to other online fish table versions, players only need to buy weapons, ammo and hunt for fish according to their needs. Players can join Thunder Dragon with real money or use the demo version, free to join, extremely authentic experience.

Thunder Dragon owns a beautiful design, delicate in every little detail. Players will have a satisfying feeling with vivid 3D graphics and in-game features. When the player logs into the game, the music plays, each time the gun fires, it will be accompanied by a realistic sound. Therefore, players always feel Thunder Dragon lively and drawn to the game.

Thunder Dragon possesses a familiar image under the sea, where there are many colorful fishes and attractive payouts. Players are free to hunt big fish and small fish according to their personal preferences. When the player successfully kills the fish, the coin clicks sound and the player’s betting account is increased in prize money. 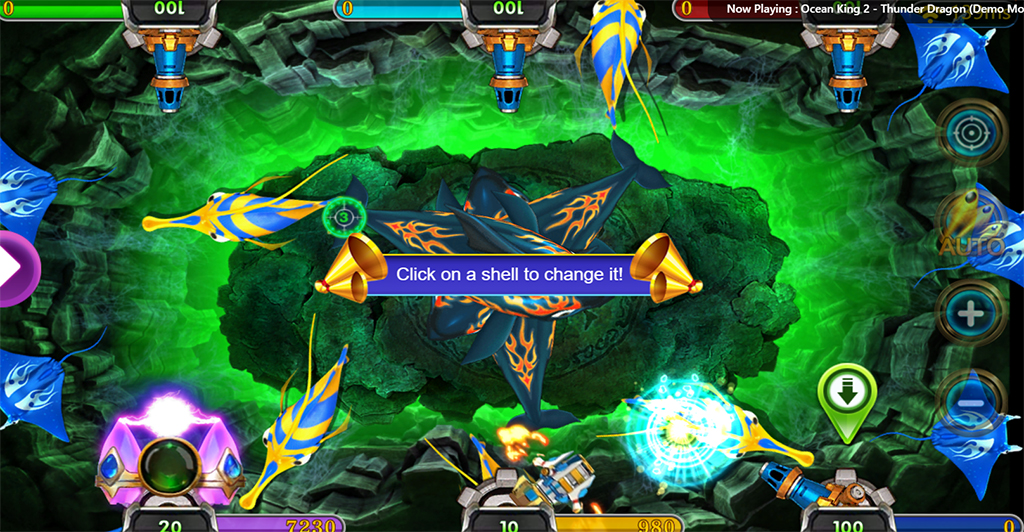 Unlike hunting ordinary fish, players who catch lightning fish will successfully activate the lightning chain that the fish brings. Then the player will get more bonus points. With the Lightning Chain boost, the player will automatically catch fish until the time runs out. This is the simplest way to get a lot of points in Thunder Dragon, however players can’t always have so much luck!

How to play Thunder Dragon

When participating in Thunder Dragon, players will encounter a paytable, above which there are up to 28 different species of fish and creatures. Each species will have a specific number of points, this is the bonus point that the player receives if hunting them successfully.

For the cases where the player uses heavy weapons such as cannons, level 7 guns or special weapons, the player can get even more bonuses. Besides, the Lightning Fish feature will help players score more bonus points because it has a self-catching fish mode for players.

Players must learn how to aim and shoot properly. Clicking the screen continuously will help the player to hit more fish. Thunder Dragon is a fish table game version with a traditional design, players will definitely feel familiar when participating in this game.

If the player is not confident in his ability, can not boldly use real bullets, real money to hunt fish, players can play the demo. Players will get used to how to use weapons, remembering the payout amount of each creature. As the player becomes more proficient, the player can hunt fish by applying Lightning fish, including octopus, lobster, lionfish, and many others. Catching them will create a chain of lightning that will continue to catch fish automatically until the timer runs out.

Thunder Dragon also offers many free spins and attractive bonuses. Each player can join at any time. They can get extra ammo, weapons, bombs or special time to hunt special creatures.

Thunder Dragon is indeed the perfect online fish table version from the manufacturer IGS. If players want to change the wind, create interesting inspiration to participate in online games, Thunder Dragon will certainly not disappoint players. Don’t forget to miss the Ocean King series and many games in the same genre as Thunder Dragon. Good luck players!